I must admit this is rather an expensive skincare routine when you add it all up, so I’ve called it luxe with good reason. I’ve accumulated these products over time and most were bought when there were discount offers running or came as part of box subscriptions or gifts with purchase. Some products have also gone up in price significantly since I bought them (e.g. May Lindstrom).

As mentioned in my previous post, over time choosing good quality natural skincare products has become more of a priority for me and something I’m willing to spend more money on (within reason!). I share these products as I enjoy using them and find they agree with my skin, and perhaps you will too. 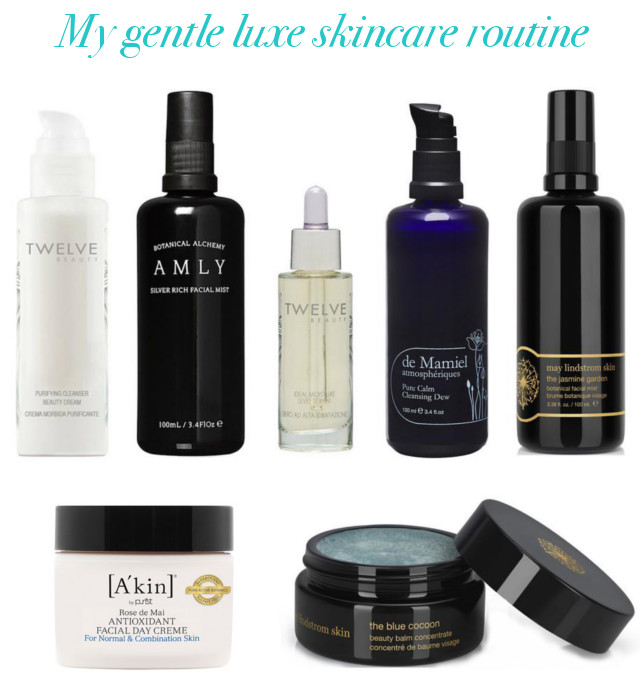 What are your favourite skincare products to indulge in?

Green tea has many reputed health benefits; components called catechins (such as EGCG) are thought to support heart health and blood sugar control, while the amino acid L-theanine has a calming effect. I’d never gotten into the habit of drinking green tea, not being a great fan of hot drinks generally, but reading this study on the role of green tea in possibly enhancing ovarian cancer survival rates made me more willing to try (in the spirit of ‘every little helps’).

I’ve found green tea to be bitter when trying it in the past, but I’ve discovered the type of green tea you use and how you prepare it can make a big difference.

Japanese sencha green tea seems to have a more delicate flavour than some other varieties and it is also supposed to contain some of the highest levels of EGCG. Clearspring do a good one, although it’s quite expensive if you buy the tea bags. I’d suggest getting a box to start with to see if you like it, then if you do, consider swapping to the loose leaf version, which I think works out to be more economical.

In preparing it, using water just before it gets to boiling point helps to reduce bitterness. Then to maximise the antioxidants in your brew, cover your cup (or use a teapot) and leave the tea to brew for 10 minutes. It’s also best to drink it within one hour of making it, again to maximise antioxidant content.

People seem to vary a lot in how many cups they advise you to have per day (from two to eight) and that the benefits are mostly if you do this consistently over a long period of time. For me this is still a work in progress – I tend to aim for two or three, but may have one or none! While green tea is lower in caffeine than black tea or coffee, it does still contain some and this may be a factor to consider for some people. I say go with what feels right for you. No single dietary factor is a magic solution for any health condition, so I think it’s important not to get upset with yourself if you don’t like something or don’t manage to incorporate it into your daily routine.

Written by a thirty-something English girl learning to live well. I’ve long been interested in wholefood nutrition, natural beauty products and holistic healthcare. Being diagnosed with ovarian cancer has prompted me to integrate what I know more fully into my daily life and to seek out new ways to support myself through treatment. This is a space to share my experiences and things I find helpful along the way.

While I happen to be a nutritional therapist, I’m not currently working and the views expressed on this site are not intended to constitute advice or replace conventional medical treatment. Any suggestions made are based on personal use, and readers should always consult their oncologist, medical team, or appropriately qualified healthcare professional regarding any dietary changes or supplements you are considering. What is appropriate for me may not be for you.

All original content is ©2017 and may not be reproduced without permission.